On March 28th 2017, 206 young brilliant minds took over the Innovation Complex Rotunda as ICUBE collaborated with I3 – Investigate! Invent! Innovate! supporting the next wave of inventors and entrepreneurs in the GTA. For the second consecutive year, the University of Toronto Mississauga was host to the event showcasing students in grades seven and eight solving everyday issues by applying their science, math and technology skills to invent an innovative product. 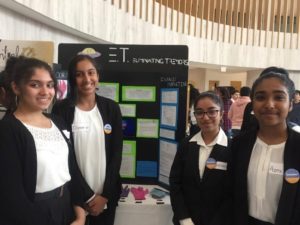 As part of Entrepreneurship Week at U of T, 52 projects were displayed at this year’s Invention Convention. The presentations in the Rotunda piqued the interest of those passing by, but the minds and enthusiasm of the young entrepreneurs was what really attracted the visitors. Many university students, as well as faculty and staff were eager to learn about the invention and innovation process that these young Alexander Graham Bell and Olivia Poole’s were able to produce.
Ideas included a revolutionary glove that reduced the shaking of hands due to tremors; a grip that helps stop the pain in fingers experienced after playing video games for a long period of time; a self-defense wristband featuring an alarm, camera, pepper spray and flashlight; and even an electric scarecrow that senses animals near crops.

“Some of these students pitch as well as our master’s students” declared Rose Mary Craig, Program Coordinator for the Masters of Science in Sustainability Management program. While all of the inventors were at different stages of the innovation process, each had their own prototypes and detailed business plans including pricing strategies and marketing campaigns. Some went so far as to print business cards, create their own websites and set up social media channels to promote their products. Diana Aldaz, from the department of management with entrepreneurial endeavors of her own stated, “I didn’t want to leave, they were all so good!”

Samara, Ifeoluwa, Elsa and Ria hope to modify their self-defense wristband to make it more compact and user friendly. Geetika, Divhleen, Azmi and Dilpreet look forward to increasing the sales of The Fit to help the nearly 20.5 million people in North America who suffer from Tremor-Related Psychological disorders. Syed, Sahil and Harman are eager to release their product into the market and make your gaming experience perfect through the VIB Grip.

Brian Do, a Commerce Finance student at UTM, was very impressed with the ideas that the inventors were able to develop and encourages them to “keep going to pursue your idea and never give up. As Thomas Edison once said, ‘our greatest weakness lies in giving up. The most certain way to succeed is always to try just one more time.’”

ICUBE Program Coordinator Sam Dumcum tweeted the Office of the Registrar and UTM Research Office petitioning for early admission for the future class of 2028. “With awesome innovations like this beginning in middle school, ROP’s and entrepreneurship programs like ICUBE will continue to have an integral role at post-secondary institutions.

If you have an idea you’d like to turn into a business – check out ICUBE UTM Programs for more details.
Whether your a UofT Student, Alumni, Faculty or community member, you’re welcome to innovate here!