We recently invited guest speaker Ian Carnevale, the co-founder and brand director for Andela, an organization that trains and pairs software developers with global tech firms, to its Entrepreneurship Showcase.

“Brilliance is evenly distributed but the opportunity is not,” said Carnevale during a casual and intimate Q&A session with Sam Dumcum, ICUBE’s program coordinator, and event organizer. “People are paying attention to what’s happening on the African continent; the startups that are coming from there and the energy and capital that’s going in has grown tremendously over the last couple of years and that’s helped to build up the ecosystem.”

Founded in 2014 with its corporate headquarters in New York, Andela was recently backed by the Chan Zuckerberg Initiative, GV (Google Ventures) and Spark Capital, and has already raised $41M in seed capital.

“When we started Andela, there were four founders from four different countries: Canada, the United States, Nigeria and Cameroon,” explained Carnavale. “My partners grew up with vastly different backgrounds and had dramatically different upbringings but we cared about the same things.”

“I’m a big believer in the diversity of thought,” he continued. “We’ve brought different perspectives but have the same passions, philosophies and world views. I think that’s why the magic happened.”

Carnavale also credited his background in Computer Science and Digital Enterprise Management (DEM) from the University of Toronto Mississauga for his newfound success.

The RBC Innovation and Entrepreneurship Speaker Series is part of RBC’s $3 million commitment to the Boundless campaign intended to enhance the University’s entrepreneurship ecosystem. Previous events have included Geoffrey Hinton, as part of Entrepreneurship@UofT Week in March 2017, and Brad Katsuyama, CEO of IEX Group and John Stackhouse, Senior Vice-President – Office of the CEO, RBC in November 2016. 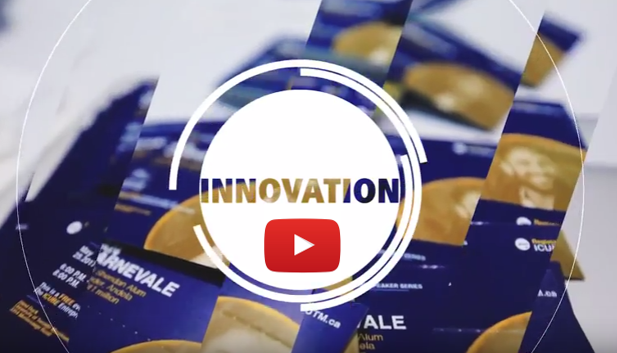 Just Vertical co-founders and current UTM Master of Science in Sustainability Management (MScSM) students Kevin Jakiela and Conner Tidd took home the top prize for their vertical sustainable growing system. They were also recently awarded 50th Legacy Funding from the University of Toronto Mississauga to support the implementation of their farm towers across campus.

The second spot went to FetchIT (Matthew Karabela, Mike Barcz and Samir Begic), an app that aims to solve delivery and moving dilemmas by connecting you with a pickup, van or truck owner. Third-place winners NISE Tech (Rayner Mendes and Grant Hu) pitched a cooking device that can be controlled through your phone.

The panel of judges included:

Photos by Ryan Cerrudo, Diana Aldez and Alia Serapiglia for the Institute for Management & Innovation.